A lot of fun was had, a big thank you to all the participants for joining in and making this such a lovely way to celebrate Sashas and the Season.
Now Closed... emails were sent to Secret Santa on 1st November. 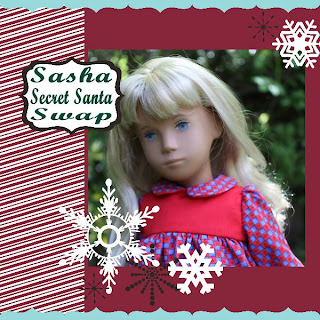 Call it what you may:
‘Wish upon a Star’ ‘Secret Santa Christmas Swap’  ‘Winter Swap’
So how about it folks, a swap especially for this time of year?
It’s that time of year for letters to Santa, or just simply a wish for winter for those who don’t necessarily celebrate Christmas.  It would be lovely if anyone who wants to join in can, regardless of faith or beliefs.
This is how it works.
1. You will write a letter to Santa (or Make a Wish) for Sasha, Gregor or Baby Sasha/Gregor.   WE do need to know the size of the doll you are asking for J
You can ask for up to 5 items, BUT SANTA WILL ONLY SEND 3. Remember we never got everything we ask for either!!
Keep in mind that not everyone participating can sew or knit. So you can ask for things like toys, hats, blanket, pj’s, outfits, puppy or pet, teddy bear, books, play food, dishes…etc…you get the idea.  For example, my Sasha and Gregor kids are desperately in need of socks!  Or if you are happy with surprises, just say so.

2. After you write your letter you send it to me (via email:  lorraine(@)takaro.co.uk {removing brackets} ) You must send the letter by Sunday October 30th. Please include your postal mail address so I can give it to your Secret Santa.  If you could also include in your letter what type of wishes you feel you would be best a fulfilling (eg. Shopping, knitting, sewing, crochet, woodworking etc…) that would be very useful.
3.  Once I have all the letters I will assign them to your Secret Santa and forward the information to that person by 2nd November.
4.  All swaps must be mailed by December 3rd. This will allow plenty of time to get to Sasha/Gregor or Baby by Christmas, especially important for those posting overseas. Please remember no more than three of the items should be sent, and a small item for the Sasha/Gregor/Baby’s mummy is always appreciated. Keep it fair for everyone.
5. If you have any questions, please contact me and ask and remember most importantly…HAVE FUN!