While trying to decide who is going to be my Trendon Girl of the Month tomorrow I thought I would dress my blondes up in the smocked dresses I now have.  I am now lucky enough to have enough smocked dresses for every one of my blonde girls.

I was asked the other day what my 'Sasha of the Month was for and as it has now been almost eight months since I posted Molly, my Sasha for January I thought I would explain again.

Having had to have sold a lot of my Sasha's late last year, and indeed this year for various reasons, I wanted to focus on the ones I had left and as I had twelve Trendon Sashas I thought it would be a good idea to feature those.  I still have only twelve Trendon Sashas (unaltered - I haven't counted Tilly Rose, my re-root, nor have I counted Danni , who was bought as a boy, but had severe hair loss).  Of course one of my featured Sasha girls, Lucy, has since left home and another has taken her place, so featuring the one that has replaced her is going to be a bit difficult!  It might be that I choose two to feature in December.

Anyway back on to my blonde girls. Charlotte is now here to stay.  She was the one of the three that my husband bought me when I first discovered Sasha and has kind of become a 'mini-me' through her modelling my dress for the 'Dress A Sasha - Images of Childhood' before I went to the festival.  Spending so much time with her made me realise that I couldn't part with her and to do so I would only regret it.

Charlotte is the lucky one to get to wear the wonderful dress I received at the Festival made by Millie Dingham.

My eight Trendon girls from left to right

My eight Trendon girls with my one No Nose Gotz girl Marcia on the end.

They are loving their pretty smocked dresses which they have teamed with JJ shoes.

Inspired by these wonderful dresses I bought a couple of books. 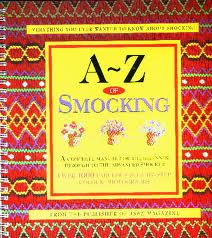 My fabric is pleated so all I have to do is start, which I hope to do tonight.